Nebraska business owners: things you must know about tax laws in your state.

Not required to pay income tax or corporation occupation tax to Nebraska. Business income is passed to partners who pay Nebraska income tax on their personal return. Partnerships are required to file Form 1065N.

The Nebraska Department of Revenue does not allow for composite filing for nonresident shareholders/partners. 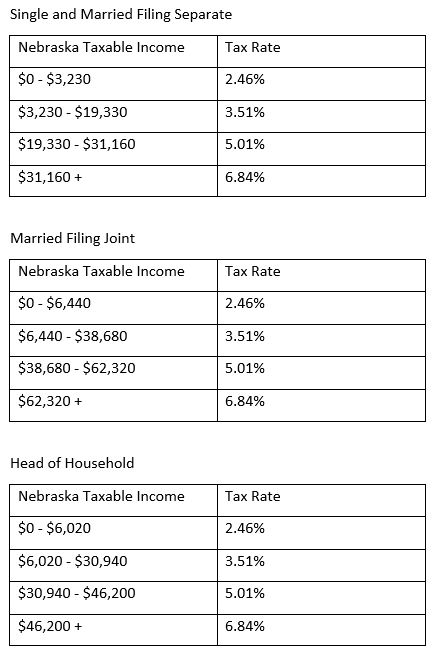 S corporation and partnership returns are due on the 15th day of the third month following the close of the tax year. For calendar year filers, the due date is March 15th.

Individual income returns are due on the 15th day of the fourth month following the close of the tax year. For most calendar year filers, the due date is April 15th.

Nebraska corporations that can reasonably expect their tax liability to exceed $400 must make estimated quarterly payments. S corporations may make voluntary estimated payments in the same manner as other corporations.

Taxpayers must make estimated income tax payments if they expect to owe more than $500 in tax at the end of the tax year.

S corporations and partnerships have three options to file for an extension of time.

Individuals may request an extension using one of the following methods:

Filing a late return will result in a 5% per month penalty, up to a maximum of 25% of the unpaid tax at the due date or extended filing date.

If your business was formed or is located in another state, but generates income in Nebraska, it may be subject to Nebraska taxes. The rules for taxation of multistate businesses, including what constitutes nexus with a state for the purpose of various taxes, are complicated. If you run such a business, you should consult with a tax professional.